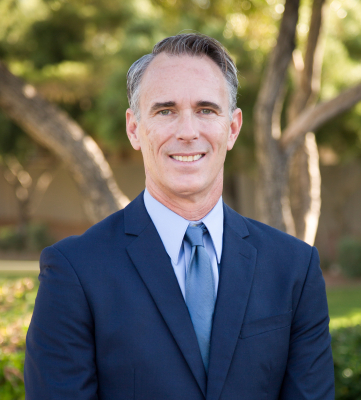 Dr. Frank Akers II has been an optometrist for 20 years and serving his patients in the East Valley since 2001. After graduating from Northern Arizona University, he moved to Chicago. He attained the highest level of training from the Illinois College of Optometry (ICO), while is his wife, Corinne, was getting her graduate degree in Occupational Therapy from Midwestern University.

During his training at ICO, Dr. Akers received Honors in his clinical rotations, which included Primary Care, Low Vision, Advanced Contact Lenses, and Pediatrics. He practiced optometry for a year in the Chicago land area while Corinne finished her training. He was staff optometrist at Lawndale Christian Health Center (LCHC).

While there he continued to hone in his management of Ocular diseases, such as Glaucoma, Macular Degeneration, and complications from Diabetes and Hypertension. Dr. Akers enjoyed most the position of being able to take care of a disparately underserved population. Dr. Akers returned to Arizona in 2000. He wanted to continue to improve his skills in the advanced contact lens fitting.

He did this by accepting a position with the Rinehart Eyecare Center. Dr. John Rinehart is one of the top contact lens practitioners in the country and has lectured around the world. Dr. Akers credits a lot of his skills with contact lenses to the time he spent with Dr. Rinehart. He purchased his own practice in 2001, the Atwood Eyecare Center.

The name became Akers Eyecare Center following Dr. Atwood’s retirement that same year. He has always been active in his local church and community. He also has been on the Board of the Arizona Optometric Association (AZOA) for 7 years and presently is the immediate Past President of the AZOA. He also Co-Chairs the Bronstein Cornea and Contact Lens Seminar.

An annual meeting designed to educate eye care professionals about contact lenses and the health of the eye. When not serving his patients, you can usually find Dr. Akers with his family up North enjoying the cooler weather and the higher elevation.

Schedule An Appointment
Email Us